Star Wars and the American Revolution 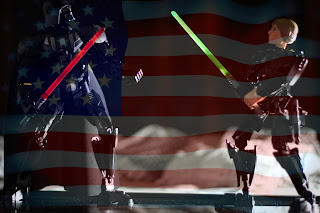 The rebels are still fighting the Empire, both in the Star Wars saga and in the American psyche. The enduring popularity of this myth-generating enterprise gives us some insight not only into America but also the world in which we live. First, a disclaimer of sorts: I am a Canadian born in the States. Though my parents emigrated when I was an infant, I have an enduring attachment to America; when I returned for two years as an adult, I was received into the Catholic Church, a time of precious memories for me. Therefore, I am at odds with certain forms of nationalism on both sides of the 49th parallel, as I believe it is possible for the same person to love both Canada and the United States. On my part, any analysis or critique of America is not schadenfreude, but sympathy, and even encouragement to my American cousins to keep fighting the good fight.

I am a fan of the Stars Wars epic, but after somewhat wearisome repetitions on a theme, I began to wonder: what's up with the Death Star? They destroyed it in the first and third movies of the original trilogy and again in last year's "The Force Awakens" (well, it was a "Death Star" planet), and now they are stealing the plans for the Death Star in the latest installment (prequel to "A New Hope"), in order to destroy it. This may reflect a paucity of creativity among the writers; however, they may also be responding to a phenomenon in the collective imagination -- that the Evil Empire never goes away. The rebels must keep rebelling, and keep destroying the Death Star, again and again and again.

In human experience, it is true that the spiritual battle is always with us, whether we like it or not. The world, the flesh and the devil are aligned against us, the latter in implacable hostility. We must wage war for our own good, happiness and salvation. As St. John reminds us, "the whole world is under the Evil One," and Jesus himself testifies that the devil is the Prince of this world, the original Evil Emperor.

Well and good. But I also wonder if there is something peculiarly American about Star Wars. In the original, it is no coincidence that swashbuckling Luke and Han Solo speak with American accents, while the uniformed minions of the Empire enunciate in the Queen's English. This is the historical narrative of the founding of America, of heroic rebels throwing off the yoke of an autocratic and abusive Empire, an appealing story that has influenced the global imagination through pop culture.

I recall the year I volunteered with a religious order in Woonsocket, RI, spending one day a week in a Catholic school, in a grade 7 class of mostly Spanish-speaking students. I couldn't help but notice how the children were drilled with the basic facts and slogans of the American Revolution. I myself remember, as a child watching American cable TV, being captivated by sing-along educational infomercials about the "shot heard round the world, it's the start of the revolution." Every nation has its founding myth. Rome has its Aeneid and America has the Revolution. "Myth" in this sense does not refer to sheer fantasy, but far exceeds mere facts about the past. It is history embellished and raised to mythic status, so that the story of a nation's origins shapes the current identity of its citizens, instilling in them a grateful patriotism, inspiring them in the pursuit of common goals, and so on.

Canadians always seemed jealous. Americans had a heroic and glorious Revolution, while we had a cup of tea. And a polite conversation. England defeated France in the Seven Years War ending in 1763. The "Evil Empire" of Britain actually wanted to impose its will, with the ultimate goal of turning French Catholics into English Protestants. But it never happened. Why not? Thank you America. By way of threat, your presence saved French Catholics. Revolutionary grumblings in New England sufficiently spooked the British rulers into governing differently up north. Inspired perhaps more by realpolitik than compassion, they clearly understood that disenfranchised French subjects would be fodder for rebellion. Accordingly, the British passed the Quebec Act of 1774, which introduced crucial changes to former legislation: reference to the Protestant faith was removed from the oath of allegiance, and the act formally recognized freedom of religion for all French Catholics. So effective was the modus vivendi achieved that the French-Canadian militia fought next to British regulars to repel American invaders in the War of 1812.

Canada was built on compromise not revolution. This is no declaration of moral superiority, but an observation of the facts of history. It has shaped the Canadian psyche differently from the American. We have our issues, and for years Canadian conservatives cast envious eyes at the solidity and sanity of American traditional values, while bemoaning our culture of judicial activism bent on re-moulding society along ideological lines. Having said that, for better or worse, Canadians are still more inclined to trust government, and less likely to sniff out traces of tyranny and wave the banner of revolution against oppression. (This "trust" can border on non-chalance, and engender a dubious passivity toward the Nanny state, but that's another issue).

A founding myth can perpetuate itself in public consciousness in an interesting way. For example, we were founded on a Revolution; therefore, we have to keep fighting for our rights . . . because . . . we are always oppressed? Non-American historians have occasionally referred to the Revolution as the First Civil War, as Americans were fighting fellow Americans as well as British soldiers. In this line of thinking, the Civil War was like a second Revolution, this time of the Southern States against the North. (But it was also a Revolution in the most positive sense, of the moral conscience of the North against the practice of slavery in the South). The recurring theme of Revolution leads us to wonder: is it part of our identity to be always fighting for our rights? Is it part of our identity to always feel oppressed for whatever reason?

In our own imagination, expressed through our modern myths and pop culture, we need to be clear that our primary identity is not that of rebels against the Evil Empire, but of sons and daughters of the Good King. There is a risk that people on both sides of the political spectrum identify themselves primarily as rebels against the Empire or victims of oppression. The libertines feel oppressed by so-called European white male supremacy, and their absolutist truths concerning sex, marriage and two genders. Then white males feel strangled and oppressed by political correctness and official double-speak. The danger of adopting a victim mentality is to view reality in keeping with our false identity. We feel oppressed, so we look for signs to confirm our suspicion that we are indeed oppressed. And since we are always oppressed, we must always be rebelling.

Ronald Reagan once took flak from liberals by calling the Soviet Union an "Evil Empire." For decades, the Cold War provided the West with clear moral lines and a strong sense of purpose. Do Americans, or human beings in general, always need an "Evil Empire" to unite us and help form our identity? Can a people be motivated by the sort of rebellion and revolution described by Chesterton? In the human psyche, because of original sin, we must confront the reality of slavery and oppression, and our need for the constant Revolution of Christ, that rebel Jesus who saves us from the dominion of darkness, the Empire of Satan. Such is the ultimate truth, but is it too spiritual to unite the masses?

We often hear that America was founded on Christian principles. This is true, even if the founders' vison borrowed more from Enlightenment Deism than being grounded in a bold, Christocentric understanding of reality. The power of the authentic "myth" of Christianity is inexhaustible, with endless potential in every age for what St. Paul called the "renewal of the mind," a purification and restoration of the imagination, a vision that inspires and unites. In "Rogue One," the heroine Jyn breathes new life into the doubtful rebels by reminding them, "Rebellions are built on hope." As one reviewer put it, she is anti-totalitarian and pro-hope. That's one thing on which we can all agree. Hope -- true Christian hope -- springs eternal.