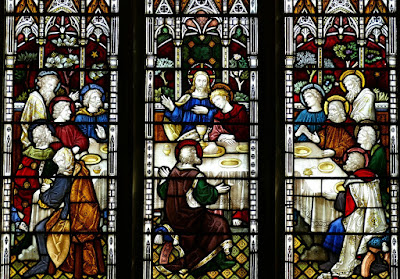 In Stirling, Scotland, there is an old and impressive church near Stirling Castle. It is the Church of the Holy Rude (“Rood” is an old English word for “cross”). It was in this church that the infant son of Mary Queen of Scots was crowned King James VI of Scotland. The construction of the present church was begun in 1414 and took over a century to complete. In 1656 a disagreement between two of the church’s Presbyterian ministers and their followers led to a wall being built across the centre of the church (between the nave and the choir). There were then 2 congregations in the same building - the East Congregation and the West Congregation. That dividing wall remained for almost 300 years, until the two congregations finally reconciled in 1936.

The wall across the centre of the Church of the Holy Rude made scandalously visible the division that existed within that particular Christian community. But it also acts as a symbol of the visible division that exists worldwide between Christian believers. This is not a new problem. It is old. To a certain degree it has been around since the very beginning.

Preserved as part of the canon of Sacred Scripture are two letters Saint Paul wrote to the Christians of Corinth. While a new and relatively small community, quarreling had divided them. So much so that each faction identified itself with a different leader of the Church: some said that they belonged to Paul, others to Apollos, still others to Cephas (Peter). And while one group said that they belong to Christ, they did in such a manner as to simply be yet another faction (1 Corinthians 1:12).

Paul warned them that such divisions are extremely harmful. He told them that Christ has never been divided (and the Church is the Body of Christ). Was he, Paul, ever crucified for them? (1 Cor. 1:13) Only one Person suffered, died and rose for all. They were not baptized in the name of Paul but were baptized in the name of Christ. Paul and Apollos were merely servants of the Lord through whom the Corinthians came to believe (1 Cor. 3:5). Therefore all divisions amongst them were deplorable and must end.

Saint Paul told them that they should be in agreement and united in mind and purpose (1 Cor. 1:10). In another of his letters, to the Ephesians, Paul makes the need for unity forcefully clear. Notice in this passage how many times he uses the word "one" to get his point across:

"There is one body and one Spirit, just as there is one hope to which God has called you. There is one Lord, one faith, one baptism; there is one God and Father of all people, who is Lord of all, works through all, and is in all" (Ephesians 4:4-6).

Dissention and division are a result of our fallen human nature. It exists within families, in workplaces, and within nations. It exists in parishes – like the Church of the Holy Rude – and it exists within Christianity at large. Every year between January 18th and 25th churches around the world observe the Week of Prayer for Christian Unity. So let us briefly examine the great divisions within Christianity.

Almost one thousand years ago a man, Cardinal Humbert, walked into the Hagia Sophia Cathedral in Constantinople and laid a piece of paper on the high altar. It was a bull of excommunication. This event symbolically marked the formal division between the Eastern and Western halves of Christianity – between the Orthodox churches and the Catholic Church – that had been brewing for centuries.

Exactly five hundred years ago this year another man, Martin Luther, is said to have walked up to the entrance of All Saints Church in Wittenberg, Germany, and nailed a piece of paper to its doors (his “Ninety-five Theses”). This symbolically marked the beginning of the Reformation, and division between Protestant Christianity and Catholicism.

While not the only divisions that have occurred, these mark the three main bodies with which most Christians today can be identified. And each of these three bodies struggles with their own internal divisions and conflicts.

Protestantism has thousands of denominations that are separated by theological disagreements, doctrinal emphases, politics, or structural organization. The Orthodox churches suffer from divisions according to culture, language, nationality, and numerous overlapping jurisdictions. And the Catholic Church has seen its own internal factionalism, especially since the Second Vatican Council, frequently typified as between progressives and traditionalists.

Yet the Second Vatican Council states in its Decree on Ecumenism that Christ the Lord founded one Church, and one Church only. In spite of this Christian communities differ in outlook and go their separate ways, as if Christ were divided.

Yet such division, the Council states, openly contradict the will of Christ, scandalizes the world, and damages the sacred cause of preaching the Gospel to every creature.

That is why Christ prayed for unity amongst those who believe in Him: “I ask not only on behalf of these, but also on behalf of those who will believe in me through their word, that they may all be one. As you, Father, are in me and I am in you, may they also be in us, so that the world may believe that you have sent me” (John 17:20-21).

And so in communion with Pope Francis “let us ask the Lord Jesus, who has made us living members of his Body, to keep us deeply united to Him, to help us overcome our conflicts, our divisions, and our self-seeking, ... and to be united to one another by one force: the power of love which the Holy Spirit pours into our hearts”.