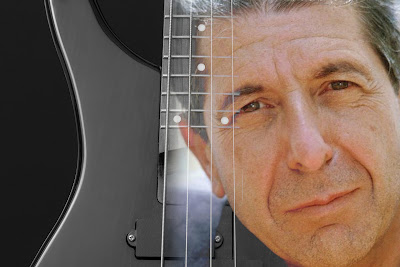 Leonard Cohen, poet laureate, singer-songwriter, prophet, visionary, and Jewish-Buddhist fascinated by Christ, was also a modern knight-errant, and a more faithful disciple of the Absolute than many sitting idly in the pews.

Cohen's voice broke into my world with his 1992 song "The Future." It is no exaggeration to say that I was stunned by his clairvoyance. It seemed that one of the prophets of old had arisen:


You don't know me from the wind
You never will, you never did
I'm the little Jew who wrote the Bible
I've seen the nations rise and fall
I've heard their stories, heard them all
But love's the only engine of survival
Your servant here, he has been told to say it clear, to say it cold:
It's over, it ain't going any further
And now the wheels of heaven stop
You feel the devil's riding crop
Get ready for the future: it is murder.

Even darker imagery emerges: "Destroy another fetus now, we don't like children anyhow. I've seen the future . . . it is murder."

This unforgettable song also includes those stark and astonishing words "Give me Christ or give me Hiroshima." Critics can analyze precisely what he meant -- is it Cohen speaking or is he adopting someone else' voice? Others may claim to know for certain exactly what he believed, but allow me to point out how extraordinary it is that someone would utter such words in any context -- conversation, poetry or song.

Cohen once admitted, "I'm very fond of Jesus Christ. He may be the most beautiful guy who walked the face of this earth. Any guy who says 'Blessed are the poor. Blessed are the meek' has got to be a figure of unparalleled generosity and insight and madness...A man who declared himself to stand among the thieves, the prostitutes and the homeless. His position cannot be comprehended. It is an inhuman generosity. A generosity that would overthrow the world if it was embraced because nothing would weather that compassion. I'm not trying to alter the Jewish view of Jesus Christ. But to me, in spite of what I know about the history of legal Christianity, the figure of the man has touched me."

Sometimes Cohen confused me, when he seemed to lurch between the flesh and the spirit. He dedicated "The Future" to Rebecca de Mornay, whom my age-group remembers from the steamy sex scene with Tom Cruise in Risky Business. So Leonard Cohen was engaged to Rebecca de Mornay, but then became a Buddhist monk? Perhaps it's not so odd. Great souls on pilgrimage often proceed by fits and starts on their journey to the promised land. I was also reminded that many skeptical Westerners, alienated from their own traditions, will flirt for a time with Eastern religion, often as an experimental foray in university days. However, anyone who spends five years in a Buddhist monastery is serious, very serious. Upon further reflection, I actually admired Cohen for this, and my respect for him deepened.

Like a medieval troubadour, Cohen sang of his lady-loves, and in his own way explored the tension in our culture between courtly, romantic love and religious aspirations.


Your faith was strong but you needed proof
You saw her bathing on the roof . . .

How many people know by heart the rest of the line?


Her beauty in the moonlight overthrew you
She tied you to a kitchen chair
She broke your throne, and she cut your hair
And from your lips she drew the Hallelujah.

Such lyrics suggest that Jews and Christians are permitted to say "Hallelujah" outside the liturgy, because there is indeed something sacred in life, love and sex.

Perhaps Cohen did have a tendency to idealize or idolize the female body, but he never stopped there. In his own understanding of the "theology of the body," he knew that the body revealed the soul, and that you could not properly love one without the other. Dante had Beatrice to lead him to Paradise, and Cohen had any number of women . . . Suzanne or Marianne or Rebecca. And even though Cohen did not achieve the great synthesis of Dante, between romantic and spiritual love, he did speak to our times, and his inner journey, on public display, enlightened and inspired us.

It is not uncommon for men in our culture to have multiple sexual partners in their lifetimes. What is rare however, is to encounter a soul of such profundity, passion and brilliance that he can gather all the raw material of sensual experience and heat it in the furnace of the spirit, refining it like silver, into a precious jewel of a song that actually assists us in contemplating the hidden beauty of life, and giving us courage to plumb the depths of our own sufferings and joys.

Cohen is both an embarrassment and inspiration to Christians: embarrassing because in his duels with God, he was closer to Truth than Christian Pharisees who honour God with their lips, while their hearts are far from him, hardened and blinded by years of habitual religion confined to externals. He is an inspiration in his intellectual honesty, confessing that no educated person on earth can safely ignore Christ; now that He has come into the world and spoken to us, everyone must eventually make a personal decision about His claims.

In many ways, Cohen was one of Kierkegaard's knights of infinite resignation, who came ever so close to being a knight of faith. For Kierkegaard, the knight of infinite resignation is a passionate man who loves deeply: "He is not afraid of letting love creep into his most secret, his most hidden thoughts, to let it twine in innumerable coils about every ligament of his consciousness . . . he feels a blissful rapture in letting love tingle through every nerve . . . " But then he realizes, for various reasons, that this love can never be fulfilled. He resigns himself to this reality, somewhat like a Buddhist who sees suffering as caused by desire, rather than the Christian view of infinite desire as a promise of perfect and complete fulfillment. The knight of faith, despite all rational arguments, believes that his love will be fulfilled, and in the "absurdity" of faith reaches out to the infinite.

Cohen spent hours "sitting at the table" with the Lord, questioning, debating. In the song "Treaty" from his last album, he laments:

In a "A Better Way," from the same album, his gravel voice intones:

It's not the truth today because the world has drifted from Christianity or too many Christians are hypocrites? Cohen is not the only one, among great minds drawn to Christ and His teaching, to be scandalized by the stumbling block of the reality of this world, and the poor example of Christians who fail to put into practice the teaching of the Master.

He stood at the edge of the sea of faith, contemplating a leap into those dark waters, leaning forward then back again, fascinated then repelled, hopeful then resigned. Though he never took the plunge, he was a man after God's own heart. In an age of superficiality, pusillanimity and mendacity, here was an Israelite in whom there was no guile, a man who was not afraid to be a man, and to wrestle with God. Here was a knight who was faithful to his quest.

Near the end, he also longed for his rest. In the title track of his last album "You Want It Darker," released less than a month before his death, Cohen expresses himself in the words of Abraham and Moses, "Hineni, Hineni. I'm ready, my Lord." In another song from his 2012 album "Old Ideas," Cohen prays,