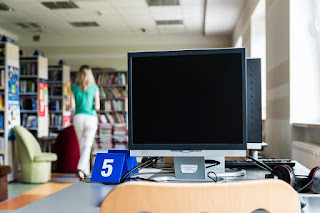 This is a perfect example of a disingenuous, evasive and dismissive answer - Coun. Tierney hides behind phrases with which he wants to assure you how well they mean it (“...to ensure a safe and welcoming place”), but almost simultaneously, he actually assures you that the library will be a welcoming place especially for perverts.

Then, instead of addressing the issue, he talks about things that they supposedly can’t change (customers personal devices and technical problems). In the next sentence he proves that he doesn’t really take all this seriously anyway, by trying to educate you with the phrase “may be CONSIDERED offensive by SOME”, and, in case you need some more educating, he also adds that your complaint is groundless because “the term objectionable is itself subjective” and “what is considered objectionable to you is not to me” - he doesn’t say the second part, but he means exactly that. Terrorist for some, freedom fighter for others. In this case: pervert for some, free-speech fighter for others. Filth for some is information for others.

Coun. Tierney is also evading the essence of your complaint and placing it into a different light - for instance, by talking about “sexual content” (which could mean morally neutral education about anatomy, etc.), while you are talking about a specific case of sexual content - pornography.

What’s more, to discourage the less “sophisticated”, he uses phrases that indicate that this matter is some kind of science that should be left to the specialists - “we need to rely on number of elements such as tools, policies and practices”. Elements, Elements. In other words, your complaint was naive - you had no idea of the complexity that is required for creating a safe and welcoming place!!

Finally, Coun. Tierney announces “with regret” that he is done with you, and that he will not inform you any further (interesting, where important matters of public policy are concerned, the freedom of information suddenly ceases to exist).

What’s more, you were not interested in the details of “internal employee matters” (which is how he has rationalized why he will not inform you) but precisely in the tools, policies and practices - what they will be doing about this, whether something will change, and that your complaint won’t just be thrown in the garbage.

Another thing: about the excuse that they can’t influence what happens on people’s personal mobile devices: it is actually quite simple. It would suffice to put up a sign, or to hand out information when issuing a library card, that viewing pornography in the library is prohibited even on personal devices, and that there will be sanctions in case of such behaviour. This is what they do with smoking bans. And if worst comes to worst, then for those who can’t stay away from pornography, they could provide some kind of ventilated closet in the basement.